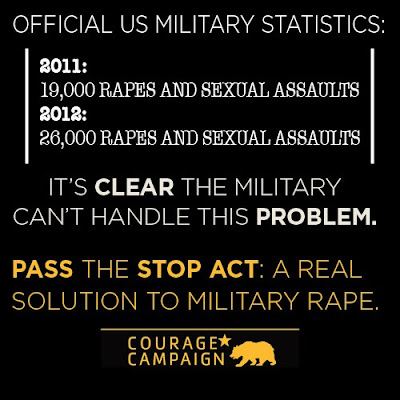 26,000  estimated rapes in the U.S. military last year and less than 300 convictions.  Something is terribly wrong here.  Clearly, the military has a cultural problem and their efforts to remedy these shameful statistics are worst than inadequate.  Forty years ago a friend home on leave from the military explained to me that all the women at her base traveled in pairs or groups for fear of rape.  That was four wars ago, drastic change is needed.


Pentagon Report on Sexual Assault in the Military in 2012

Posted by stephen sarbiewski at 8:34 PM