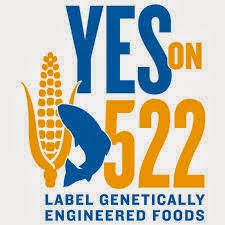 Text From I-522
AN ACT Relating to disclosure of foods produced through genetic engineering; adding a new chapter to Title 70 RCW; and prescribing penalties.
BE IT ENACTED BY THE PEOPLE OF THE STATE OF WASHINGTON:
NEW SECTION. Sec. 1. The people find that:
(1) Polls consistently show that the vast majority of the public, typically more than ninety percent, wants to know if their food was produced using genetic engineering. Without disclosure, consumers of genetically engineered food unknowingly may violate their own dietary and religious restrictions.
(2) Currently, there is no federal or state law that requires food producers to identify whether foods were produced using genetic engineering. At the same time, the United States Food and Drug Administration does not require safety studies of such foods. Unless these foods contain a known allergen, the United States food and drug administration does not require the developers of genetically engineered crops to consult with the agency. Consultations with the United States food and drug administration are entirely voluntary and the developers themselves may decide what information they may wish to provide.
(3) Mandatory identification of foods produced with genetic engineering can provide a critical method for tracking the potential health effects of consuming foods produced through genetic engineering.
(4) Consumers have the right to know whether the foods they purchase were produced with genetic engineering. The genetic engineering of plants and animals is an imprecise process and often causes unintended consequences. Mixing plant, animal, bacterial, and viral genes in combinations that cannot occur in nature produces results that are not always predictable or controllable, and can lead to adverse health or environmental consequences.
(5) United States government scientists have stated that the artificial insertion of genetic material into plants, a technique unique to genetic engineering, can cause a variety of significant problems with plant foods. Such genetic engineering can increase the levels of known toxicants in foods and introduce new toxicants and health concerns.
(6) Forty-nine countries, including Japan, South Korea, China, Australia, New Zealand, Thailand, Russia, the European Union member states, and other key United States trading partners, have laws mandating disclosure of genetically engineered foods on food labels. Many countries have restrictions or bans against foods produced with genetic engineering.

Posted by stephen sarbiewski at 8:37 PM