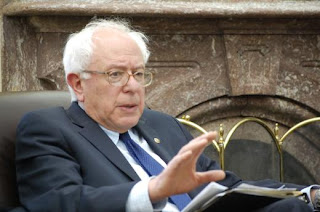 It was during the health care fight 2 years ago, that I became a big fan of Senator Sanders.  Bernie was an articulate and forceful spokesperson for the Public Option.  He challenged  Republicons  lies about death panels, costs and eligibility.    The senator has been a frequent and vociferous critic of the war in Iraq.  The senator voted against the use of force in Iraq when he was a congressman.  Bernie has railed endlessly about tax policies that benefit the few and the growing wealth disparity in this country.  He describes himself as a Democratic Socialist.  I have often seen him advocate the benefits of European Social Democracy over our system with its fast fading middle class.  Senator Sanders as an independent is more Democratic than half of the so called democrats in the Senate.  Bernie has published his 8 and 1/2 hour real filibuster on extending the Bush tax cuts as a book.   Bernie's Book  In the Senators on words:

“The rich are getting richer. The middle class and poor are getting poorer.  Meanwhile, we have a $1.5 trillion dollar deficit and a $14 trillion dollar national debt.  What is the Republican solution to the deficit crisis? More tax breaks for millionaires and billionaires.  Savage cuts in programs that are desperately needed by working families.”

Posted by stephen sarbiewski at 12:56 AM