The 2010 republicans ran on a platform of jobs.  The republicans have produced many anti-abortion bills but nothing directly promoting jobs.  In fact, they have done everything in their power to stifle job growth.  President Obama sent a jobs bill to capitol hill last fall, Speaker Boehner wouldn't even let the bill come up for a vote.  The jobs bill which was completely paid for would have reduced unemployment by a full point.  Our highways and bridges are crumbling and the republicans are stalling on a transportation bill.  Between 1980 and 2009 the US experienced 30 bridge collapses.  Since January 1, 2010 and June 1, 2012 there have been 29 bridge collapses, that's one bridge failure every 1.3 months.  For a decade the republicans promised millions of jobs with the Bush tax cuts.  Where are the jobs?  One way the US government has helped pull our nation forward during recessions has been to increase jobs in the public sector.  Hiring teachers, firefighters and policeman, helps our nation and provides much needed dollars circulating throughout the economy.  This recession, the worst since the great depression, unlike any of the other three recessions, we have lost public sector jobs, as you can see from the chart below.  This isn't President Obama's fault, the blame lies with the republican house, which controls spending in this country.  The republicans want to regain the White House through high unemployment numbers the republicans are directly responsible for. 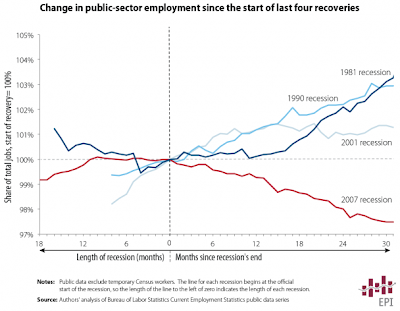 The republicans are shameless in their pursuit of power, last year they even tried to slash spending for AmeriCorps.  We can help create public pressure for the congress to do the right thing and pass President Obama's Jobs Bill and expand existing programs like AmeriCorps and Habitat for Humanity.  OurTime.Org has a petition to immediately create a million new jobs through existing community service organizations.

A generation is a terrible thing to waste. Pledge to create one million new public service positions by expanding programs such as AmeriCorps, CitiYear, Habitat for Humanity, Teach for America, and others so we can rebuild our country now.

Sign OurTime.org's petition and lets get Americans to work!

Posted by stephen sarbiewski at 11:41 PM