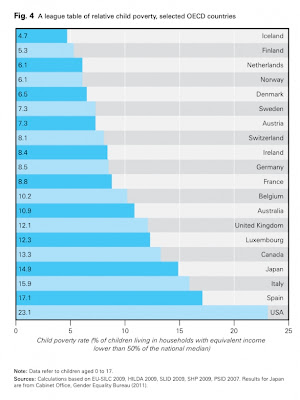 A new report from UNICEF  places the United States of America at second to last among 35 industrialized  nations with 23.1% of its children living in poverty. Romania beat out the US with 25.5% of its children living in poverty.   Almost one in four American children live in poverty in the "richest" nation on earth?
Mitt Romney has said, "I'm not concerned about the very poor"
Mitt Romney isn't concerned about 1 in 4 American children?
Paul Ryan isn't concerned about the poor either.
Paul Ryan wants to cut 5.3 trillion dollars, over 10 years, from Medicare, Medicaid, food stamps, welfare and health care in order to deliver 4.3 trillion dollars, over 10 years, of tax cuts to the super wealthy.

The republicans feel that by cutting aid to the poor it will help the poor and avoid an “insidious moral tipping point ”.  Conversely, cutting billions of dollars of taxpayer aid to oil companies will not help the oil companies but hurt the oil companies.  Isn't America lucky to have such smart republicans in congress and running for the white house, that they can tell when cutting funding will help the poor, while those same cuts would hurt the oil industry?  Republicans, also understand that the wealthy can profit from additional revenue through tax cuts, but applying those tax cuts to the poor, would hurt the poor, that is why Romney wants to raise taxes on the poor, or those making under 30,000 a year.   In spite of saying he's not concerned with the poor, Romney really wants to help the poor by raising their taxes and reducing their income.
The Republicans won't stop until the US is number ONE in child poverty.

One bright spot of the study, showed that government policy has a significant impact on child poverty.  The US spends about 1.25% of GDP on families and it shows.   UNICEF study is here. 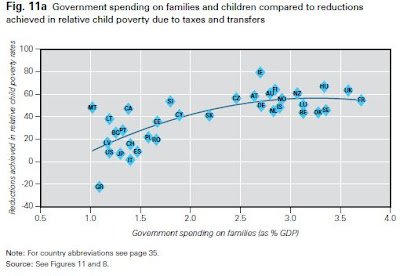 Paul Ryan, helping the poor by hurting them  by Dana Milbank Washington Post

Posted by stephen sarbiewski at 7:37 PM