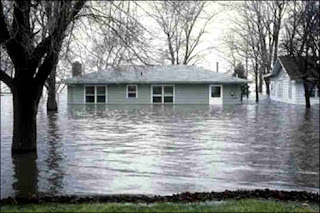 Normal homeowners insurance doesn't cover flooding.  But you can buy flood insurance compliments of the US government.  At least you could until senator Rand Paul (R-Ky) attached a "life begins at conception" amendment to the flood insurance bill.  The "fertilized egg is a person bill" would ban all abortions and many popular forms of birth control- the pill and intrauterine devices.  This bill failed a referendum in Mississippi by 16 points last November.
Hurricane season is upon us. Homeowners whose homes occupy low-lying ground must be delighted that republican obsession with abortion, and the ultimate philosophical question--when does life begins, takes precedence over mundane matter like government assistance to rebuild flooded homes.

Posted by stephen sarbiewski at 11:01 PM