Can You Judge Rob McKenna By His Company? 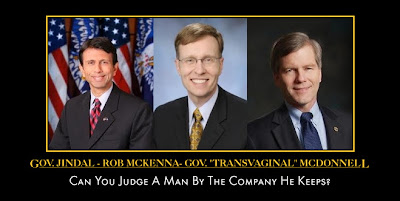 Yesterday, Virginia Governor "Transvaginal Probe" McDonnell hosted a fundraiser for Rob McKenna in Virginia.  Governor McDonnell achieved nationwide notoriety for signing a bill mandating unnecessary transvaginal ultrasounds which women had to pay for in order to have an abortion.

Governor Bobby Jindal has endorsed Rob McKenna for Governor of Washington and has also attended fund raisers for Rob McKenna in Spokane.  Governor Jindal's state of Louisiana,  is the 49th worse state for children, where more than 1 in 4  children live in poverty.  In 2008 Governor Jindal signed the Louisiana Science Education Act which allows school boards to teach creationism instead of evolution in Louisiana public schools.  Naral Pro-Choice rated Gov. Jindal's State as the worst state in the nation for women's reproductive rights.


Can we judge what kind of Governor Rob McKenna aspires to be, by the company he keeps?

Posted by stephen sarbiewski at 2:27 AM