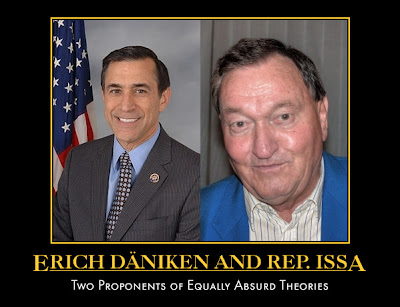 Rep. Issa  has been pursuing a conspiracy theory worthy of Erich Anton Paul von Däniken and his Ancient Astronaut nonsense.  Rep. Issa's (R-CA) theory:
In 2006, Senator Barack Obama persuaded then President George Bush and his Attorney General,   Michael B. Mukasey to start a program called Fast and Furious, to sell guns to the Mexican drug cartels in order to create a public backlash against guns that the future Obama administration could use to enact stricter gun control laws, which they haven't done.

If you really want to know what happened  with the ATF read this well researched article by Katherine Eban, who spent six months, talking to agents and reading thousands of pages of documents.

The truth about the Fast and Furious scandal By Katherine Eban


Nobody disputes that suspected straw purchasers under surveillance by the ATF repeatedly bought guns that eventually fell into criminal hands. Issa and others charge that the ATF intentionally allowed guns to walk as an operational tactic. But five law-enforcement agents directly involved in Fast and Furious tell Fortune that the ATF had no such tactic. They insist they never purposefully allowed guns to be illegally trafficked. Just the opposite: They say they seized weapons whenever they could but were hamstrung by prosecutors and weak laws, which stymied them at every turn.


Stephen Colbert in this 3 minute clip, succinctly and aptly describes the ridiculous theory.

Posted by stephen sarbiewski at 12:38 PM