Demand Kathryn Wylde step down petition from the Other 98% 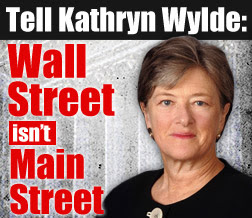 We think that Wall Street fat cats should be treated like everyone else - you break the law, you get prosecuted. Some feel differently:

"Wall Street is our Main Street — love ’em or hate ’em. They are important and we have to make sure we are doing everything we can to support them unless they are doing something indefensible.”

The New York "Post: House of Cards" or Indefensible actions by Wall Street


"In a staggering 92 percent of the claims brought by creditors asserting the right to foreclose against bankrupt families in New York City and the close-in suburbs, banks and mortgage servicers couldn’t prove they had the right to kick the families out on the street, a three-month probe by The Post has shown [...]
The Post dug through more than 150 Chapter 13 bankruptcy filings from June 2010 in New York’s Eastern and Southern federal court districts — covering the five boroughs, Long Island and nearby northern counties including Westchester–in search of local foreclosure or pre-foreclosure cases. We then put together a random sample of 40 cases where creditors such The research unearthed claims riddled with robosigners, suspicious documents and outrageous fees. And in a stunning 37 out of 40 cases, The Post discovered a broken chain of title from the original lender to the company now making claim against a local family for its home and thousands of dollars in questionable fees.as banks — but more often loan servicers — filed proofs of claim for first mortgage debt."

Almost everyone with any political power functions as puppets of Wall Street and could care less about main street.  Kathryn Wylde is so oblivious to the fate of consumers she actually said this in defense of here original statement.


"The Fed really had nothing to do with any of this," Kathryn Wylde said in an email. "I jumped to the defense of an important NY employer and that is really the story."

It never occurred to her that she should do anything for consumers.

Posted by stephen sarbiewski at 11:40 PM