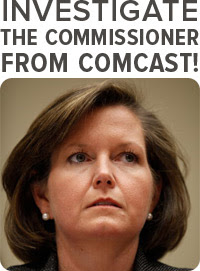 Before this merger was approved by this commissioner Senator Al Franken said this:

"I have some experience in this industry, and I flat-out don't trust Comcast and NBC to operate in the best interest of consumers in Minnesota and around the country when it comes to this merger. Combining a company who provides programming and one who provides the pipes that carry said programming would almost certainly be a raw deal for consumers and independent content producers alike."

This "public servant" was a virulent opponent of net neutrality  and voted to approve the merger of two giant media corporations NBC/universal and Comcast and 4 months later gets a huge paying job with Comcast?   If you smell a rat also, click this link and sign the petition.
Demand congress investigate FCC Commissioner Baker's conflict of interest
Posted by stephen sarbiewski at 1:19 PM