In this clip Paul Ryan says "we need to address the drivers of our debt".  He also claims that the reason we are running into the debt limit so soon is because of the spending spree over the last two years.  Mr. Ryan seems to forget his votes for two unfunded wars and the unfunded Bush tax cuts.  Did he also forget that he voted for the completely unfunded Medicare part D,  George Bush's gift to the pharmaceutical industry?  He should change his name to Paul Unfunded Ryan.  We can all imagine Paul Unfunded Ryan ordering a 15 course dinner then after eating the fortune cookie, complains he's had too much to eat.  Paul Unfunded Ryan , still oblivious to his own contribution, is still asking in wide eyed wonderment what is driving the debt.  Meet Chad Stone who is Chief Economist at the Center on Budget and Policy Priorities, where he specializes in the economic analysis of budget and policy issues. 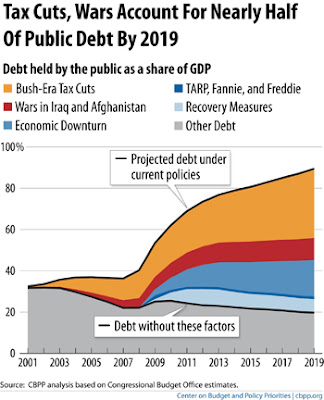 Posted by stephen sarbiewski at 8:03 PM