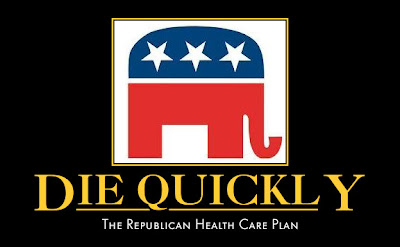 We have to be fair. "Die quickly" is only half of their healthcare plan. The first half is "Don't get Sick".  Congressman Alan Grayson D, Fl said that last year during the healthcare debate on the floor of the house.  The Republicans spent Massive dollars in his district and unfortunately, he lost.  Yesterday in an Interview with Cenk Uygur, Alan said:  " Every other industrialized country in the entire world not only provides health care for its seniors, but health care for everyone. And the Republican right wing is trying to tell us that somehow we can't afford health care for our seniors. We’ve got 40,000 Americans under the age of 65 who die every year, because they can't afford to see a doctor when they're sick. And now they want to extend that [tragedy] to the most infirmed, most victimized, sickest part of the population, our senior citizens, so that more will die."

You can contribute to Alan Grayson's new campaign here

Posted by stephen sarbiewski at 8:17 PM