The Bush Tax cuts after 10 years 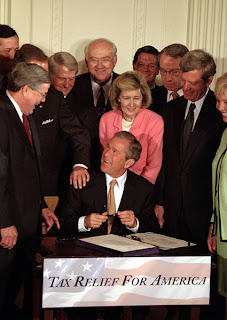 From Citizens for Tax Justice

Ten years ago, on June 7, 2001, President George W. Bush signed into law the first of several tax cuts that drove the balanced budget he inherited from President Clinton deep into the red. Last year, Congressional supporters of Bush’s policies pushed through an extension of these tax cuts through the end of 2012.

Posted by stephen sarbiewski at 12:44 PM