Where are the jobs, Speaker Boehner? 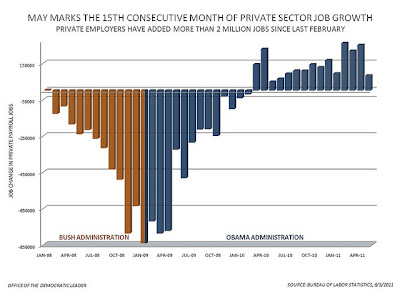 Jobs report today was not good.  Although, the U.S. economy is no longer in immediate danger of enterig the second great depression we still have some structural problems reflected in the poor jobs report.  Clearly, banks are still speculating instead of investing and corporations are sitting on large amounts of unused capitol.  What the country needs now is jobs, and since the private sector isn't hiring, the government needs to step in and provide some impetus.  Unfortunately, after incurring huge debts fighting two wars, creating crushing tax breaks for the wealthy and free gifts to the pharmaceutical industry now the republicans no longer want to spend money.  They don't want to raise any money either.  What are they doing in government if they are not interested in performing governmental functions?  Hire me to be your delivery boy, but don't expect me to deliver packages?!   After 5 months of ruling the roost the republicans have introduced 0 jobs bills.   The following democratic jobs bill were either voted down or voted against even being voted on by the republican majority.  from "the gavel"

Come to think of it why would the Republican party be interested in a jobs bill?   They represent the top 2% income bracket in this country.  Those people don't need jobs.   They have enough money to last them thousands of lifetimes.   So you can wait forever if your expecting the republicans to introduce a jobs bill.

Posted by stephen sarbiewski at 9:47 PM