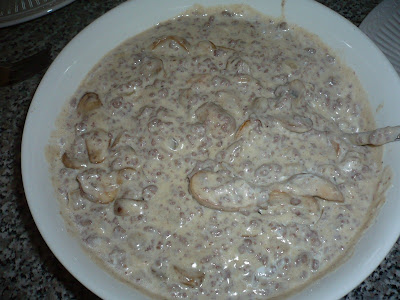 Last week, I asked my wife what she would like for dinner.  "Beef Stroganoff, but I want my old recipe, in the copper recipe box", was her quick reply.  When my wife and I were both working she used to make this for dinner on busy weekend nights.  Served over rice, hamburger stroganoff, despite its looks, is a tasty and nourishing staple.   My wife received this recipe from her friend Cheryl almost 30 years ago.   The only change I made to the original recipe was substituting  fresh mushrooms for canned mushrooms which I've never been fond of.

Cook the onion in a tablespoon of olive oil, until close to translucent then add the hamburger, salt and pepper.   Brown the beef slightly then add 2 T of flour and the garlic, brown the flour in the pan, a couple of minutes.  Add the cream of chicken soup, mix well and remove from heat but keep warm (mixture will be very thick).  In a separate frying pan, cook the mushrooms in a little butter or olive oil, cook the mushrooms until they have released their water and are slightly browned.  When ready to serve add mushrooms and sour cream to the pot with the hamburger, serve over rice or egg noodles.
Posted by stephen sarbiewski at 12:41 AM