The Rich Do Not Create Jobs


This short TED talk by billionaire Nick Hanauer on income inequality is fantastic.  Mr. Hanauer's talk was initially banned from posting online by TED as being too "politically controversial" and "insulting".  It is sad that challenging the republican big lie "Don't tax the job creators, or it will kill jobs", is now considered politically controversial. 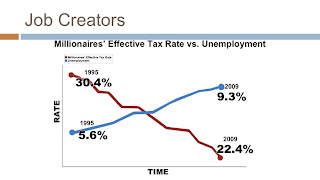 This slide from Nick Hanauer's talk at TED  demonstrates the "Don't tax the job creators" fallacy.  The promise from the tax cuts for the wealthy was they will create more jobs.  What the evidence shows is exactly the opposite, as taxes have been cut for the wealthy, unemployment has risen.  The key to a strong economy is a healthy middle class with money to spend.  Demand creates jobs, not wealthy people.

Posted by stephen sarbiewski at 9:48 PM