“[L]et’s declare that in the wealthiest nation on Earth, no one who works full-time should have to live in poverty,” 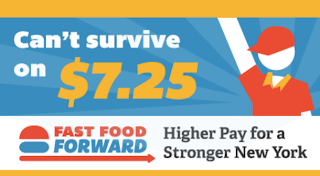 The food service industry grosses over 200 billion a year while the average salary of a fast food worker is 11,000 dollars a year.  An 8 hour day yields 56 dollars, who could live on that?

Sign the petition to raise the minimum wage to 10.10 an hour. (MoveOn)
Posted by stephen sarbiewski at 6:45 PM