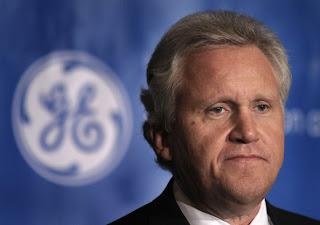 President Obama appoints the CEO of GE to head his Jobs Commission.  In 2010 on 14.2 billion dollars of PROFIT, not gross, paid ZERO dollars in taxes.  But wait, it gets better; they also received a 3 billion dollar check from the US government.  Thats right they got a 3 billion dollar refund and paid 0 dollars in taxes.
Scott Paul, the executive director of the Alliance for American Manufacturing, said: “I mean, Immelt has outsourced a ton of jobs. They've closed -- GE has closed 29 factories in the last two years alone. And if you're trying to send a signal to those white, working-class voters that left the Democratic Party in droves in November, naming one of the country’s leading outsourcers as your chief strategy guy on jobs -- I don't think was the smartest move.”

Posted by stephen sarbiewski at 7:00 PM