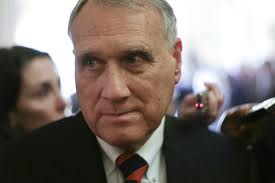 Senator John Kyle said on the floor of the U.S. Senate:  "If you want an abortion you go to Planned Parenthood and that's well over 90% of what Planned Parenthood does."  Not even close senator, abortions account for about 3% of Planned Parenthood services.  When his staff was contacted about his statements they replied: "his remark was not intended to be a factual statement."  His staff recently removed his lie from the congressional record fortunately there is video.http://thinkprogress.org/2011/04/08/jon-kyl-90-percent-planned-parenthood-abortion/

Senator Kyle represents the state of Arizona, he is a devout Muslim with 2 wives and 14 children, 11 of them out of wedlock. He is currently undergoing treatment for substance abuse at a D.C. hospital.  The previous was not intended as a factual statement.
Posted by stephen sarbiewski at 9:47 PM