Where Are The House Republicans? 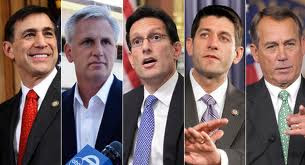 House Republicans are on holiday.  President Obama cut short his vacation in Hawaii and the US Senate is in session working to put our fiscal house in order.  But the US house is dark, silent and empty.  2.1 million Americans are in danger of losing unemployment benefits if the House fails to act.  Almost everyone in the country realizes that the Bush tax cuts for the top 2% must expire but not house republicans.  They are holding back tax cuts for the poor and the middle class in order to restore big cuts to the very wealthy.  So where are the house republicans?  Instead of moving our country forward, rumor has it that the house republicans are lined up outside Mitt Romney's California beach house, waiting their turn to sit in Mitt's new Audi and slowly ride his car elevator up and down.

Posted by stephen sarbiewski at 8:43 PM