Mann and Ornstein Indict the GOP

It's Even Worse Than It Looks;


"One of the two major parties, the Republican Party, has become an insurgent outlier — ideologically extreme; contemptuous of the inherited social and economic policy regime; scornful of compromise; unpersuaded by conventional understanding of facts, evidence and science; and dismissive of the legitimacy of its political opposition,"


Mann and Ornstein rightly blame the news media for doing a mediocre job covering the most important political story of the last three decades: the transformation of the Republican Party. They are critical of the conventions of mainstream journalism that lead to the evenhandedness they have now abandoned themselves. They see a "reflexive tendency of many in the mainstream press to use false equivalence to explain outcomes," when Republican obstructionism and Republican rejection of science and basic facts have no Democratic equivalents. It's much easier to write stories "that convey an impression that the two sides are equally implicated." [...]
And now, as Mann and Ornstein document so vividly, at a time when only good government could help us rediscover our footing as a nation, our Grand Old Party defines itself as the party of anti-government. This is why the title of this book is so good: Our situation really is even worse than it looks.

Now, however, the Republican Party is dominated by doctrines formerly on the political fringe. Friedman called for monetary flexibility; today, much of the G.O.P. is fanatically devoted to the gold standard. N. Gregory Mankiw of Harvard University, a Romney economic adviser, once dismissed those claiming that tax cuts pay for themselves as “charlatans and cranks”; today, that notion is very close to being official Republican doctrine.
As it happens, these doctrines have overwhelmingly failed in practice. For example, conservative goldbugs have been predicting vast inflation and soaring interest rates for three years, and have been wrong every step of the way. But this failure has done nothing to dent their influence on a party that, as Mr. Mann and Mr. Ornstein note, is “unpersuaded by conventional understanding of facts, evidence, and science.”
And why is the G.O.P. so devoted to these doctrines regardless of facts and evidence? It surely has a lot to do with the fact that billionaires have always loved the doctrines in question, which offer a rationale for policies that serve their interests. Indeed, support from billionaires has always been the main thing keeping those charlatans and cranks in business. And now the same people effectively own a whole political party.
Which brings us to the question of what it will take to end this depression we’re in.
Many pundits assert that the U.S. economy has big structural problems that will prevent any quick recovery. All the evidence, however, points to a simple lack of demand, which could and should be cured very quickly through a combination of fiscal and monetary stimulus.
No, the real structural problem is in our political system, which has been warped and paralyzed by the power of a small, wealthy minority. And the key to economic recovery lies in finding a way to get past that minority’s malign influence. 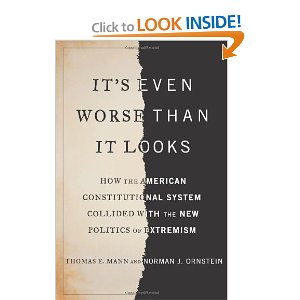 Posted by stephen sarbiewski at 12:53 PM