Harry Reid, the Senate Majority leader reported today, a Bain Capital investor stated that Mitt Romney paid no taxes for ten years?  Where are your tax returns Mitt Romney?  Mitt Romney hasn't even released one full year of tax returns let alone the twelve years of complete tax returns that his father George Romney released.  What is missing from George Romney's tax return?  American citizens with foreign bank accounts must file a Report on Foreign Bank and Financial Accounts, or "FBAR" in accountant slang.  Mitt Romney has a Swiss Bank Account and must have filed his FBAR as part of his 2010 tax returns.   He has not released the FBAR so his 2010 tax returns are incomplete, and he only released an "estimate" for his 2011 returns. 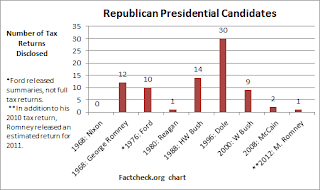 Mitt Romney also cites John McCain who only released two years of tax returns.  Senator McCain also spent 5 1/2 years in a North Vietnamese POW camp, Americans were happily willing to give this veteran the benefit of the doubt.  While senator McCain was sweating in a POW camp, Willard M. Romney was living in a mansion in France.  Most Americans are not willing to give the man who spent 30 months in France during the height of the Vietnam War the benefit of the doubt.  Release your tax returns, Mr. Romney.

Posted by stephen sarbiewski at 8:30 PM