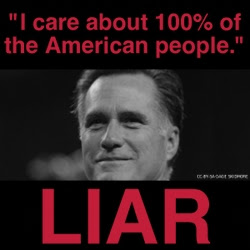 This election is about more than political parties. When it comes to health care, it is about truth and lies.  In front of a national audience, Mitt said he cares about 100% of Americans. With private donors, behind closed doors, he said he didn't care about 47% of Americans. He claimed pre-existing conditions are covered under his health care plan, but he conveniently skips the fact that it's only for people with no interruptions in their coverage. That's the exact policy we already had under laws in effect before the Affordable Care Act was enacted.
It's simple. Romney's a liar. He'll say whatever he thinks it takes to get elected.

The Affordable Care Act is far from perfect, but it is a definite improvement over what we had before.  By repealing the ACA Romney would make us all defenseless against the healthcare insurance industry again.

Health Care for America Now (HCAN) is a national coalition of more than 1,000 groups in 50 states representing 30 million people. We work to promote, defend, implement and improve the Affordable Care Act (ACA) at the state and federal levels, protect Medicare and Medicaid, increase corporate accountability and confront forces that seek to take away critical services. We believe in creating jobs, not cutting programs people depend on.

Posted by stephen sarbiewski at 9:52 PM