The Republican War Against Women

Joan Walsh replying to Rep. Cathy McMorris Rogers (R-Wa) claim that the Democrats were "fabricating" the  republican war on women to distract from "real issues":


“Democrats didn’t make the GOP presidential field back “personhood” laws that would criminalize some forms of birth control. They didn’t force the newly elected House GOP to make defunding Planned Parenthood their first legislative goal. And they didn’t propose the Blunt Amendment that would have allowed employers to withhold health insurance coverage not only for contraception, but for any treatment they disapproved of…”

Proof of the Republican War on Women, including anti-abortion legislation, abstinence-only education, war on birth control/contraception, and of course the war on Girl Scouts.  Republicans are insistence upon legislating their personal religious beliefs on the rest of America.  Ignoring America's history of separation between church and state, republicans continue to practice the golden rule, they have the gold, so they make the rules. 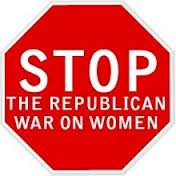 Posted by stephen sarbiewski at 9:24 PM