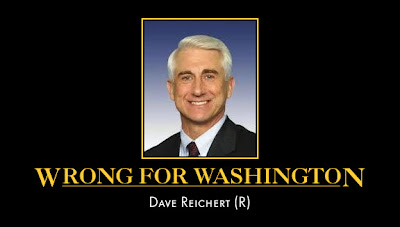 Dave Reichert rode the republican wave that washed over the US in 2010 in his victory over Suzan DelBene.  Even with the nationwide republican support Reichert only won by 4 points over a political newcomer.  Dave Reichert voted to end Medicare, against President Obama's stimulus bill, against the Lilly Ledbetter Fair Pay Act and has voted three times to defund Planned Parenthood.

Why does Rep. Reichert vote against women's healthcare?  Perhaps, the answer lies in the 0% rating issued to Mr. Reichert by the Americans United for Separation of Church and State (AU).  Reichert isn't opposed to mixing religion and politics as long as it doesn't interfere with his War policies.  He supported Bush on Iraq and is an ardent supporter of our failed and inane War on Drugs.  In 2010 Reichert along with the rest of the GOP ran on a jobs platform, yet they have done nothing to encourage job growth.  The GOP even tried to defund AmeriCorps.  We need a representative in Washington that will represent its citizens not special or religious interests.  We want a representative that places the needs of America before the wants of the GOP.
Karen Porterfield's Campaign Website

Posted by stephen sarbiewski at 2:13 PM