Krugman Was Right About Paul Ryan 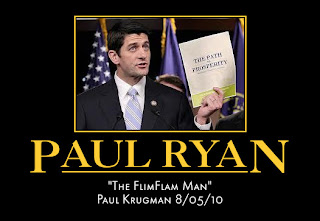 The media has been in a tizzy over Paul Ryan's lie laden speech at the GOP convention in Tampa last week.  We don't have to rely on Ryan's fact challenged speech to look at his character, there is his budget; "The Path to Prosperity".  Two years ago, after Ryan released his first budget, one columnist ( a Nobel prize winner) declared the plan; "leftovers from the 1990s, drenched in flimflam sauce."  Paul Ryan's "audacious" budget, cuts taxes for the wealthy, eliminates Medicare, slashes spending on education and the poor and still does NOT balance the budget.  The Path to Prosperity doubles down on trickle down.  Paul Ryan's budget is as fraudulent as the facts in his GOP convention speech.   But Paul Krugman, called him out two years ago.


"He’s often described with phrases like “intellectually audacious.”
But it’s the audacity of dopes. Mr. Ryan isn’t offering fresh food for thought; he’s serving up leftovers from the 1990s, drenched in flimflam sauce. ...

And I do mean slash. The Tax Policy Center finds that the Ryan plan would cut taxes on the richest 1 percent of the population in half, giving them 117 percent of the plan’s total tax cuts. That’s not a misprint. Even as it slashed taxes at the top, the plan would raise taxes for 95 percent of the population.
Finally, let’s talk about those spending cuts. In its first decade, most of the alleged savings in the Ryan plan come from assuming zero dollar growth in domestic discretionary spending, which includes everything from energy policy to education to the court system. This would amount to a 25 percent cut once you adjust for inflation and population growth. How would such a severe cut be achieved? What specific programs would be slashed? Mr. Ryan doesn’t say.
After 2020, the main alleged saving would come from sharp cuts in Medicare, achieved by dismantling Medicare as we know it, and instead giving seniors vouchers and telling them to buy their own insurance...

The Ryan plan is a fraud that makes no useful contribution to the debate over America’s fiscal future."

Posted by stephen sarbiewski at 9:07 PM