Let's Go Off The Cliff 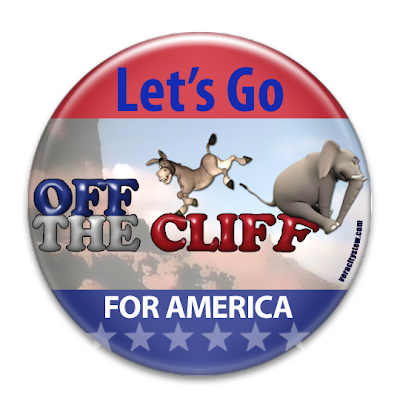 We Join MSNBC’s Lawrence O’Donnell and a Few Brave Democrats in calling the Tea Party’s Bluff and allowing America to go off a Fiscal Cliff rather than allow  them to cut education, lunch programs, and vital programs in exchange for more military funding and tax cuts for the 1%.

Mitch McConnell, senate minority leader released a graceless and hardline statement on President Obama's overwhelming victory Tuesday night.  Nothing in his statement encouraged me to believe he wants to work with this administration. Given the chance Senator McConnell will reprise his role as Obstructor-in-Chief filibustering every bill to completely block forward progress in America.  We need to change the filibuster rules and go Off The Cliff, then we'll see if the senate minority leader has a change of tune.

You can purchase this button from VeracityStew

Posted by stephen sarbiewski at 9:00 PM