Seattle March Against The War On Women, 4/28 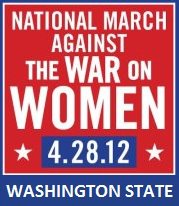 
Help defend women's rights and pursuit of equality. Join Americans all across the United States on April 28th, 2012, as we come together as one to tell members of Congress in Washington DC and legislators in all 50 states, "Enough is enough

Everyone is invited to join, plan, and rally as we unite to demand that every person be granted equal opportunities, equal rights, and equal representation.

Posted by stephen sarbiewski at 2:02 PM