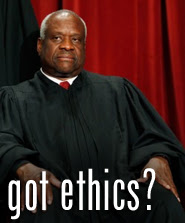 Clarence Thomas checked the box for NONE on his wife's income when she made almost a million dollars from a conservative action committee.  He didn't do this once, he did it repeatedly.   Clarence Thomas has run afoul of   18 U.S. Code 1001.   99% of the population couldn't get away with repeatedly "forgetting" to mention 750,000 dollars, why should Clarence Thomas?

Title 18 of the U.S. Code, which can include up to one year of imprisonment. Thomas, however, might be subject to prosecution under 18 U.S. Code 1001, which calls for a fine, imprisonment of up to five years, or both, for making false statements or entries.

From People for the American Way:
Please sign our petition supporting the call for an investigation now.


Secretary Duff,
I support the recent letter from 20 members of Congress urging the Judicial Conference to follow the law and refer the matter of Justice Thomas's non-compliance with the Ethics in Government Act to the Department of Justice.
Please stand up for the institution of the Supreme Court by holding Justices to an ethical standard.

Please sign our petition supporting the call for an investigation now.

Throw Clarence Thomas Off the Bench

Posted by stephen sarbiewski at 11:59 PM