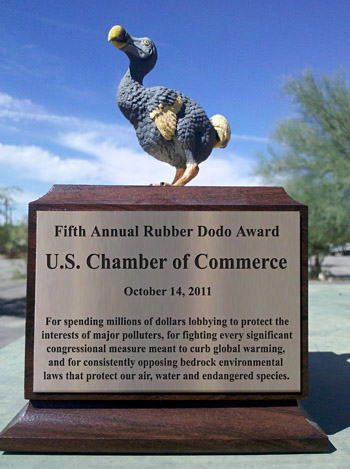 
The Chamber spent some $32 million during the 2010 elections, and more than 90 percent went to climate-change-denying candidates. With its an army of lobbyists and an array of front groups, the Chamber has also consistently opposed bedrock environmental laws such as the Clean Air Act, Clean Water Act and Endangered Species Act.

From Think Progress, click here for the list of Democratic candidates the chamber helped to defeat and how much they spent in the 21 races.


For months, Think Progress has been chronicling the “U.S.” Chamber of Commerce’s $75 million campaign to put its interests over working- and middle-class families. It uses its substantial war chest to protect companies that outsource, oppose health reform, oppose Wall Street reform, and oppose clean energy. The Chamber will not disclose who is financing this campaign, fearing a public backlash. But we know the results: The 112th Congress will have more members to protect its pro-outsourcing, anti-middle class agenda.
So far, the Chamber’s spending contributed to the defeat of 21 incumbent Democrats. In all, the Chamber spent $32.1 million on ads or independent expenditures in 62 races.

Is it any surprise that every republican is adamantly against any and all regulation anywhere,anytime on anything except for women.  The 221 male republicans in the house are ready and willing to write and pass legislation concerning women's bodies, women's wages, women's healthcare and women's reproductive rights.

Posted by stephen sarbiewski at 12:26 AM