Tuesday Karl Rove was at the Westin hotel in Bellevue doing a fund raiser for the likely GOP Gubernatorial candidate, Rob McKenna.  Many Washington citizens seemed to object to the presence Mr. Rove.
All photo's by author. 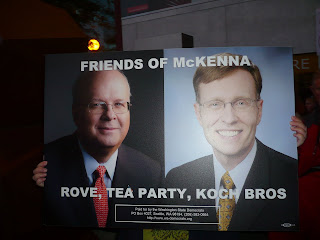 On hand to greet these two GOP lineguards, were well over 100 motivated democratic activists well armed with colorful cardboard and paper signs.


Mr. Wilson mainly was there to support his friend Jay Inslee.  But, he didn't let that stop him from making a few choice comments about Mr. Rove, that were greatly appreciated by the crowd.  Mr. Wilson also, mentioned how Rep. Inslee had been supportive of both Joe and Valerie after the Bush Administration had outed Valerie Plame.  Thanks to my friend Suzanne for the heads up on the event.

Posted by stephen sarbiewski at 2:31 AM