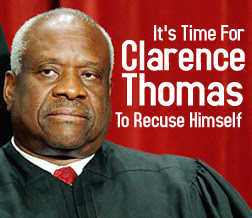 "The appearance of a conflict of interest merits recusal under federal law. From what we have already seen, the line between your impartiality and you and your wife’s financial stake in the overturn of health care reform is blurred. Your spouse is advertising herself as a lobbyist who has ‘experience and connections’ and appeals to clients who want a particular decision – they want to overturn health care reform. Moreover, your failure to disclose Ginni Thomas’s receipt of $686,589 from the Heritage Foundation, a prominent opponent of health care reform, between 2003 and 2007 has raised great concern.
This is not the first case where your impartiality was in question. As Common Cause points out, you ‘participated in secretive political strategy sessions, perhaps while the case was pending, with corporate leaders whose political aims were advanced by the [5-4] decision’ on the Citizens United case.
Given these facts, there is a strong conflict between the Thomas household’s financial gain through your spouse’s activities and your role as an Associate Justice of the United States Supreme Court."

Posted by stephen sarbiewski at 8:47 PM