The republicans in Washington DC have only two priorities.  Make sure President Obama is a one term president and keep taxes very low for the most wealthy Americans.  Republicans in congress do not serve the 300 million American citizens.  The Republicans serve the 1% that owns 42% of our nations assets, takes home 24% of the nations annual income, owns half of America's stocks and bonds and are taking in more income than any other time since the 1920's.  This is not conducive for America's economic growth or for an effective and vibrant society.   It should also, not be healthy for the Republican party, send the Republicans a message: "Why do you hate tax cuts for working families?" 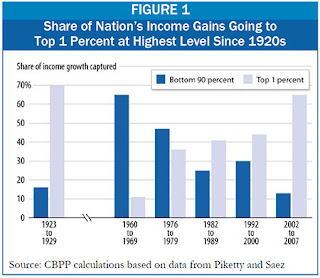 From Democracy for America:

Republicans only care about one thing -- tax cuts. It's the only thing they talk about.

Republicans are obsessed with cutting taxes, but now that Democrats have put forward a payroll tax cut that will put real money in the pockets of working Americans, Republicans say "No!"

Republicans are hypocrites that only care about lining the pockets of their big-money friends and it's time we called them out for it.

We're demanding answers. Join us now and ask Republicans in Congress -- Why do you hate tax cuts for working families?

Posted by stephen sarbiewski at 10:07 PM