The Young Turks on Current TV 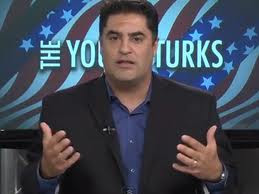 Cenk Uygur (pronounced JAY-nk YOU-ger) the cofounder and Host of the informative, liberal and progressive: The Young Turks is coming to Current TV Tomorrow at 4:00 pm Pacific just before Countdown with Keith Olbermann.  Cenk is energetic and a liberal progressive to the bone, I've always enjoyed listening to his views on the news.

Alan Grayson shared an interview he did with Cenk just after the democratic rout in 2010.  Unlike most commentators at the time Cenk did not attribute the republican victories to the essential GOP philosophy  of cutting spending and lowering taxes to the wealthy.   The 2010 rout instead was a democratic failure to support policy for the 99%:

Grayson, visibly downbeat about his election results, explained that the reason for his defeat was the inability of Democrats nationally to get out the vote. “If Democrats don’t vote,” he told Uygur, “Democrats can’t win.” Explaining that turnout had fallen 20% for Republicans and 60% for Democrats in his district since 2008, he argued that “Democrats are saddened and demoralized by this policy of appeasement” that he believes always leads to defeat where compromise is not an option. Compromise, he continued, was not possible with Republicans because their entire strategy is “no.”
“There is no ‘center left,’” he continued to argue, such that being a centrist or attempting to ignore extremes was a losing policy. Calling the campaign a “national disaster,” Grayson believes his defeat was not a local issue, but a national epidemic of malaise on the left. “Our voters went on strike,” he concluded, “and we have to win them back by accomplishing things for ordinary people.”

Posted by stephen sarbiewski at 4:52 PM