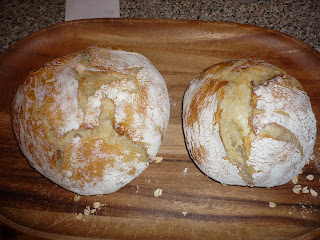 The full recipe of the bread, makes a lot of bread.  Way too much for one or two people to consume.  I've been experimenting with cooking smaller loaves.  To make these loaves, I followed the regular bread recipe
up to the point where you wrap the dough loosely in a towel.  At that point, I just cut the dough in half, re-floured and turned the halves wrapping them separately in two towels.  After 2 hours, I put one half in a 5 quart dutch oven and the other half in a 2 1/2 quart rectangular dutch oven.   I baked them 25 minutes with the lid on and 20 minutes with the lids off.
The loaf that baked in the smaller dutch oven, looks much better and is also substantially taller.  The smaller loaf is restrained by the sides of the rectangular oven and shoots upward.  The half loaf cooked in the larger dutch oven stretches out horizontally and doesn't seem as impressive.  Both loaves were great, think the sponge might have been better in the tall loaf. 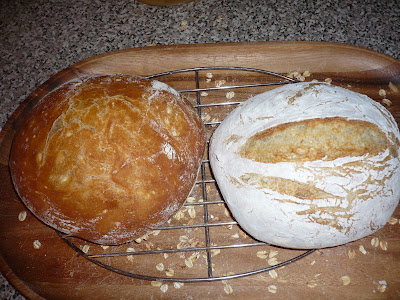 We repeated the experiment with almost the same results.  The loaf on the right was cooked in the 2 and 1/2 quart dutch oven.  I tilted the drying rack to demonstrate how taller the loaf baked in the smaller pan appears. 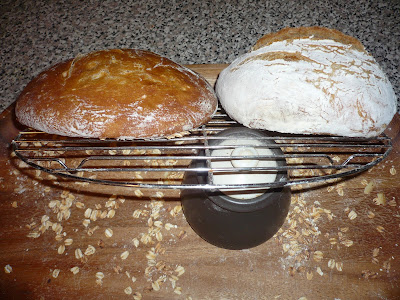 To cook smaller loaves of the bread, you can just cut the recipe in half.  Alternately, prepare a regular recipe of No-Knead bread, when you pour the dough onto the counter after it has risen a day, you cut it in half and refrigerate one half and roll the other half into a towel.  I've placed the dough, after it has risen for a day, in the refrigerator and pulled it out the next day.  A quick roll in flour and then just wrap with the towel and in 2 or 3 hours your ready to bake.  The half loaves are perfect for a couple or one person with left overs for sandwiches, french toast etc.  Happy Baking!

Posted by stephen sarbiewski at 11:39 PM

Email ThisBlogThis!Share to TwitterShare to FacebookShare to Pinterest
Labels: The Bread