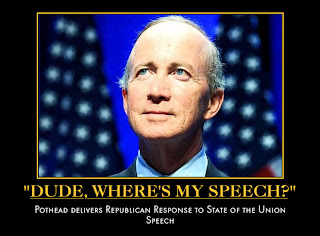 The republican party has chosen Governor Mitch "pothead" Daniels to deliver the republican response to President Obama's State of the Union Speech this Tuesday.  Daniels was arrested in 1971 for possessing enough marijuana to be charged with distribution, a felony.  Individuals in Daniels state of Indiana are routinely charged with felonies and given a 6 month to 3 year sentence for the same quantities of marijuana that Governor Daniels had in his possession.


Officers found enough marijuana in his room to fill two size 12 shoe boxes, reports of the incident say. He and the other inhabitants of the room were also charged with possession of LSD and prescription drugs without a prescription. Daniels and his two roommates in 111 Cuyler Hall, Marc Stuart '71 and Richard Stockton '71, were arrested and, after plea bargaining, Daniels eventually escaped with a $350 fine for "maintaining a common nuisance." The charges against Stockton were eventually dropped

Instead of a felony, Mitch was charged with "maintaining a common nuisance" and paid a $350 fine?  How many Black or Hispanic Americans found with 2 shoeboxes full of pot received a fine and no jail time?
Republicans called on Mitch Daniels to deliver the speech because he had a "solid record for effective government and fiscal responsibility".  Seriously?  Mitch Daniels was President Bush's budget director from 2001 to 2003.  Daniels was point man on selling Bush's education and infrastructure killing tax cuts for the wealthy.

During Daniels' 29-month tenure in the position, the projected federal budget surplus of $236 billion declined to a $400 billion deficit, due to an economic downturn, and failure to enact spending cuts to offset the tax reductions.

Mitch Daniels was also responsible for selling and predicting the cost of the Iraq war.  We spent almost a trillion dollars chasing Bush's imaginary WMD's.  What did Mitch predict the war would cost?  50-60 billion dollars. This is the best example of a "solid record for effective government and fiscal responsibility" the republicans could find?

In a few weeks the world's most famous union players are coming to Indiana.  Guess what state is trying to ram through "right to work" legislation before the next superbowl?  The National Football League Player's Association is opposed to Mitch Daniels "right to work" sham legislation.
The NFLPA released this statement:

“Right-to-work” is a political ploy designed to destroy basic workers’ rights. It’s not about jobs or rights, and it’s the wrong priority for Indiana.
The facts are clear—according to a January 2012 Economic Policy Institute briefing report (“Working Hard to Make Indiana Look Bad”), “right-to-work” will lower wages for a worker in Indiana by $1,500 a year because it weakens the ability of working families to work together, and it will make it less likely that working people will get health care and pensions.
So-called “right-to-work” bills divide working families at a time when communities need to stand united. We need unity—not division. We urge legislators in Indiana to oppose “right-to-work” efforts, and focus instead on job creation.

Not only are the republicans waging a war on women, unions, climate change, Iran and science, but now they have added a war against our constitution.   Do today's republicans ever want to build anything other than their bank accounts?

Posted by stephen sarbiewski at 10:26 PM