Steps We Can Take to Stop the Republican War on Women 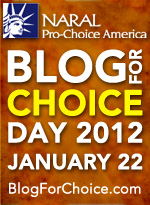 It's been 39 years since the supreme court ruled on Roe vs. Wade which legalized a women's right to choose.  Last year republican legislators across the country passed 92 abortion restricting laws.  Republicans all across the country are also trying to shut down Planned Parenthood.  Not only is abortion under attack, but contraceptives, cancer screening, STD screening and all the other services Planned Parenthood provides to millions of women and men. Republicans are eager to overturn Roe vs Wade and with a current supreme court makeup that can't tell the difference between a corporation and a person, would you feel comfortable with the supreme court making decisions about what women can do with their bodies?  Speaker Boehner (R-OH) has publicly stated his decision to overturn Roe vs Wade. Not only do the republicans want to make abortion illegal, every Republican presidential candidate wants to de-fund Planned Parenthood and enact a personhood amendment that would make most common forms of birth control and in vitro fertilization illegal.
All the Republican Presidential candidate want to repeal the Affordable Care Act, bringing back "pre-existing conditions", higher insurance costs for women and eliminating birth control with no-copay.

Unlike a bad dream this won't slowly fade away.  It will take a concerted effort by many citizens over months to stop the current attack on women's reproductive choices and health by conservative republican men.  With the current republican majorities in state legislators across the country,  the republican attacks on women's reproductive rights will never cease.  Would any amount of petitions or letters change the anti-choice stance of a republican conservatives like Eric Cantor, Orrin Hatch or Speaker Boehner?

Most of these laws were passed by old white conservative and mostly republican men.  Why would any sane society allow old white men the right to decide what women can or cannot do with their bodies?  Is this a patriarchy or a democracy?

We must elect pro-choice candidates to stem these attacks on women's reproductive choices.

Steps we can take to ensure Roe vs. Wade will have a 40th anniversary


1. No Republicans.   Almost every republican is anti-choice, do not vote for or contribute to any republican organization or individual.
2.  Donate.  Contribute to pro-choice candidates, in your state.  Even if you only contribute 2.00 dollars or one dollar you are sending a message.
3.  Volunteer.  2012 will see unprecedented sums of money being spent in this election year.  Nothing is more effective than a sincere phone call or knock on a door.
4.  Talk to your friends and neighbors, tell them how you feel about old white conservative republican men telling women what they should do with their bodies.
5.  Sign up for E-mails from one or more of the following organizations.  They will keep you informed on current events regarding women's reproductive rights.  These organizations will ask you to sign petitions, if you don't have time or money to donate, it only takes a couple of seconds to sign a petition.

Many parents with small children are having a very rough time in this economy.  Millions are unemployed, millions more are working multiple part time jobs often without health insurance, these individuals almost never have any free time for politics.   If you can, step up and fight for women's reproductive choices.


Join the virtual march and tell your leaders to trust women and support women's access to reproductive health care.

Posted by stephen sarbiewski at 8:12 PM