Finally, although today is about our defense strategy, I want to close with a word about the defense budget that will flow from this strategy. The details will be announced in the coming weeks. Some will no doubt say that the spending reductions are too big; others will say that they’re too small. It will be easy to take issue with a particular change in a particular program. But I’d encourage all of us to remember what President Eisenhower once said -- that “each proposal must be weighed in the light of a broader consideration: the need to maintain balance in and among national programs.” After a decade of war, and as we rebuild the source of our strength -- at home and abroad -- it’s time to restore that balance.

I think it’s important for all Americans to remember, over the past 10 years, since 9/11, our defense budget grew at an extraordinary pace. Over the next 10 years, the growth in the defense budget will slow, but the fact of the matter is this: It will still grow, because we have global responsibilities that demand our leadership. In fact, the defense budget will still be larger than it was toward the end of the Bush administration. And I firmly believe, and I think the American people understand, that we can keep our military strong and our nation secure with a defense budget that continues to be larger than roughly the next 10 countries combined. 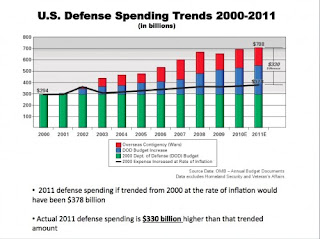 Pentagon spending is out of control.  The pentagon is unable to even accurately report how much and where money has been spent.  Spending billions in Afghanistan and across the world when we cannot afford to provide healthcare for all our citizens is unconscionable.   Sign the petition supporting President Obama's cuts to defense and urging the congress to approve deeper cuts.


Yesterday something historic happened. Making a rare public appearance at the Pentagon, President Obama unveiled a bold new approach for our military.

For some time now you have demanded not $1 more for wasteful, bloated military spending. And yesterday the President backed us up.

After years of endless war, President Obama has withdrawn our troops from Iraq and indicated that the days of obsolete, Cold War thinking are over. Obama's speech yesterday was a major step towards a smaller Pentagon budget.

This is a move in the right direction, but we need to go farther.

Sign our petition now to the House and Senate members of the Defense Appropriations committees, asking them to vote for Obama's proposed cuts AND make deeper cuts too.

Posted by stephen sarbiewski at 9:30 PM