See that big cliff in the middle of the chart?  That's when our economy almost died thanks to the unregulated  big banks unrestrained gambling spree.  Three months before President Obama took office gas was selling for 4.39 in the US under the Bush administration.  Over the last few years we have seen steadily rising gas prices.  These rising prices are a function of an economy gathering strength and the global price of gasoline.  The republicans say that President Obama's policies are leading to increased gas prices.  This is just complete nonsense.  The US, under President Obama has dramatically increased its domestic oil production from the Bush years.  So if we have more gas, why is the price going up?  Good question, its exported.  Guess what is the US' number one export?   Fuel!!
Oil companies are making record profits shipping our gasoline to South America, India, etc.   wherever they can make the biggest buck. 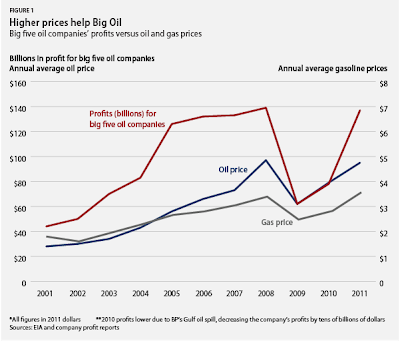 Oil is a global market and President Obama, or even the republicans cannot control the global price of oil.  Even President Bush was unable to reduce the price of gasoline when it was $4.39 a gallon in the summer of 2008 and consumers were screaming.  Historically, political instability or wars in the Middle East has exerted an upward pull on the price of oil.  Every republican presidential candidate with the exception of Ron Paul wants to bomb Iran and says so often.  Bombing Iran could easily lead to a doubling or tripling of the world's oil price and economic slowdowns across the global economy.

Could there be a connection between republican presidential candidates frequent threats to bomb Iran and the rising price of oil?  Who would profit under such a scenario?  President Obama can no more control the price of oil, than republicans can stop the lies coming out of their mouths.

Posted by stephen sarbiewski at 9:57 PM