The Zombie Pipeline is Back

Speaker Boehner and Eric Cantor have vowed to resurrect their failed environmentally disastrous Keystone XL pipeline.  I was puzzled at some polls showing the public favored the pipeline, were they talking about the same pipeline?  This study from mediate explains the favorable poll numbers by the uninformed public.  Perhaps this temporary misinformation campaign explains the republicans 60 day ultimatum to President Obama for approving the pipeline.


A Media Matters analysis shows that as a whole, news coverage of the Keystone XL pipeline between August 1 and December 31 favored pipeline proponents. Although the project would create few long-term employment opportunities, the pipeline was primarily portrayed as a jobs issue. Pro-pipeline voices were quoted more frequently than those opposed, and dubious industry estimates of job creation were uncritically repeated 5 times more often than they were questioned. Meanwhile, concerns about the State Department's review process and potential environmental consequences were often overlooked, particularly by television outlets. 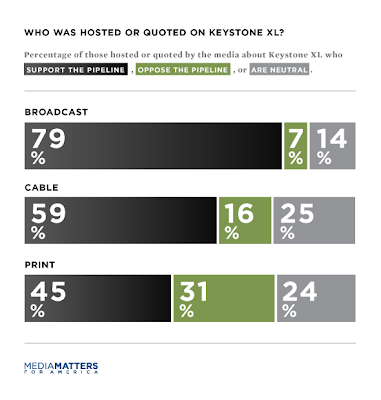 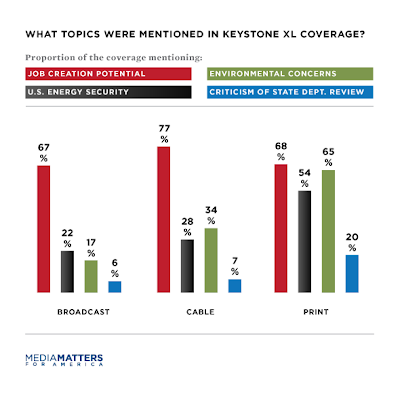 The full study is available here

Posted by stephen sarbiewski at 3:06 PM