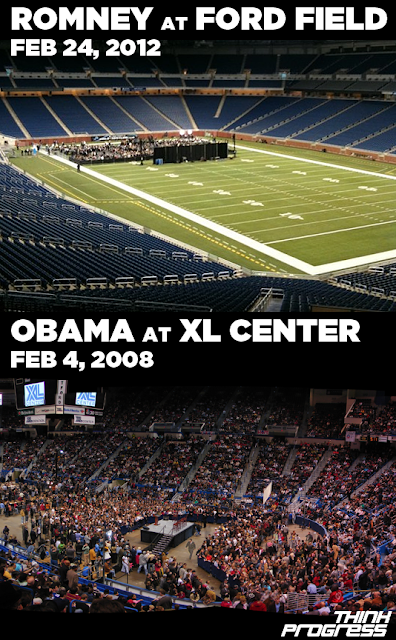 Think Progress made this photo comparison.  Thousands at President Obama's 2008 rally and 1200 people at Mitt Romney's.  Williard Romney's budget has more big tax cuts for the rich and his super pac is doing exceedingly well.  "Restore our Future" started the month off with 16 million in cash.   The Romney Super Pac might consider paying voters to attend Romney Rallies. Surely, they could afford to drop 200,000 or 500,000 per rally to ensure that Mitt's message is getting out to "packed audiences".   It would also help our economy placing money in the pockets of the 99% instead of the large media corporations.  This is also a promising strategy for the democrats; the more people know about Mitt Romney the less they like him.  My feeling is voters would weary of Romney even if they received a c note or 2 to attend.  In the near future you may see ads in magazines and Craiglist:  "wanted enthusiastic republican's to attend Romney rally, $200 cash for attending a 2 hour rally.  No previous experience, or education required."  Just remember to be enthusiastic, because Romney likes to fire people.

Posted by stephen sarbiewski at 9:48 PM