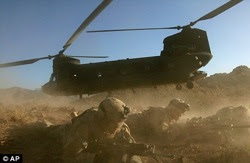 from USAction/True majority:
"We're making solid progress in the effort to end the war in Afghanistan. Last week Rep. Chellie Pingree delivered our petition to President Obama. Along with our friends at MoveOn.org, Credo Action, Win Without War, Brave New Foundation, Democracy for America and Campaign for America's Future, Rep. Pingree delivered petitions from more than 250,000 Americans calling for the President to bring our troops home next month."
Sign the petition bring our troops home


Today, 27 U.S. senators sent a letter to President Obama urging him to  bring our troops home from afghanistan:

"Endemic corruption in Afghanistan diverts resources intended to build roads, schools, and clinics, and some of these funds end up in the hands of the insurgents. Appointments of provincial and local officials on the basis of personal alliances and graft leads to deep mistrust by the Afghan population. While it is a laudable objective to attempt to build new civic institutions in Afghanistan, this goal does not justify the loss of American lives or the investment of hundreds of billions of taxpayer dollars."...“We urge you to follow through on the pledge you made to the American people to begin redeployment of U.S. forces from Afghanistan this summer, and to do so in a manner that is sizable and sustained, and includes combat troops as well as logistical and support forces. We look forward to working with you to pursue a strategy in Afghanistan that makes our nation stronger and more secure,”
Senator Merkley's website, where you can view the full text of the letter


Sign the petition to bring our men and women home from Afghanisitan
Posted by stephen sarbiewski at 6:49 PM