Image via Wikipedia
diminished revenue.  The Congressional Budget office just finished a thorough analysis of the Bush tax cuts and concluded they reduced federal revenues about 2.8 trillion dollars.[1.]   Mitch, you can't see the missing 2.8 trillion dollars?
George W. Bush's CEA chair, Greg Mankiw, called "charlatans and cranks" people that believed: "broad-based income tax cuts would have such large supply-side effects that the tax cuts would raise tax revenue." He continued: "I did not find such a claim credible, based on the available evidence. I never have, and I still don't.  By Greg Mankiw definition Mitch McConnel is a crank and charlatan, I completely, wholeheartedly concur.

Alan Viard, senior economist on bush's council of economic advisers during his first term said in 2006:"

“Federal revenue is lower today than it would have been without the tax cuts. There’s really no dispute among economists about that.
In 2006 Stanford Economist Edward Lazear, Chairman of the CEA during Bush's second term testified before the senate budget committee saying:
“Will the tax cuts pay for themselves? As a general rule, we do not think tax cuts pay for themselves. Certainly, the data…do not support this claim. Tax revenues in 2006 appear to have recovered to the level seen at this point in previous business cycles, but this does not make up for the lost revenue during 2003, 2004, and 2005.

"Mark Zandi, chief economist of Moody's Economy.com said:  "It's sad to say, but we really went nowhere for almost ten years, after you extract the boost provided by the housing and mortgage boom, It's almost a lost economic decade."

"Vibrancy of these tax cuts"?  That's a joke.  George Bush had the worst record on jobs of any president since WW2. 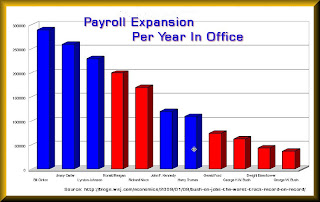 In summary, Mitch McConnel is lying.  There is no evidence the bush tax cuts created jobs.  There is a plethora of evidence that they diminished revenues and doubled our national debt.  Mitch is trying to whitewash his 8 years as George Bush's yes man and chief lackey by completely lying and ignoring facts.  We remember your lies, Mitch.
[1.]Changes in CBO's baseline projections since January 2001

Posted by stephen sarbiewski at 8:30 PM