Five charts from the Center on Budget and Policy Priorities 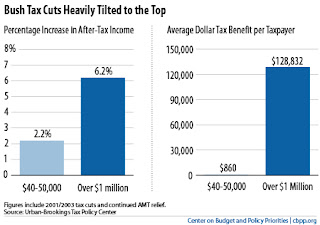 The Bush tax cuts mostly benefited the wealthy as these charts show.  Contributing greatly to the income disparity over the last 12 years, now 1% of the population receives 25% of the income.  This is not good for economic growth.   In which of these two towns of 1000 population would you rather start a business?  Town Bush where everyone is poor but 10 people are very, very rich, or town Democratic where everyone has  roughly about the same amount of money? 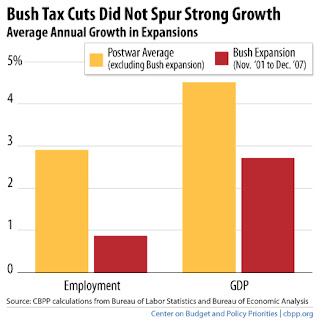 Looks like most of the businesses chose not to do a startup in town Bush.   During the 8 years of the Bush administration employment growth was abysmal and GDP lagged far behind  the average postwar average.  These figures are just plain bad.  But if you compare them to the developments that were promised by the Bush administration they are unforgivably bad.  If you'll remember, the Bush tax cuts promised that the U.S. debt was to be retired this year.  During a 2001 address to Congress, Bush said, “At the end of those 10 years [in the 2001 budget], we will have paid down all the debt that is available to retire. That is more debt repaid more quickly than has ever been repaid by any nation at any time in history.”    Bush was as wrong about the debt, and his tax cuts as he was about the "smoking gun of the mushroom cloud" in Iraq.  How could one man get so much wrong.  Low GDP growth, the worst employment growth in history since WW2, crushing debt, no WMD's, Bush didn't have to respond to the report "Bin Laden determined to attack America", Bin Laden was still busy plotting, and median wages for the majority of Americans also fell during his 8 years of office.  Lets hope this record of incompetence will never be repeated. 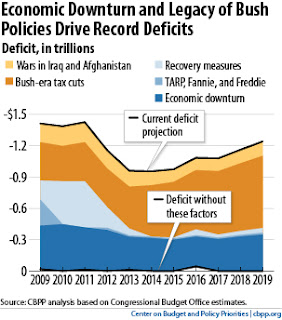 So if it is obvious to so many people that these tax cuts are bad why were they extended?  Extending them would be bad but remember the Start treaty was held hostage by the republicons for the extension of the Bush tax cuts.  See "How I learned to stop worrying and loved the Bush tax cuts".  Remember that all of the republicons voted enthusiastically for Bush's programs.  If Republicons admit the Bush tax cuts were bad for America, they'd be acknowledging what fools they were or how supply side economics made them stupid.   Also,remember the republicans only represent the top 2% income bracket who contribute heavily to their campaign coffers. 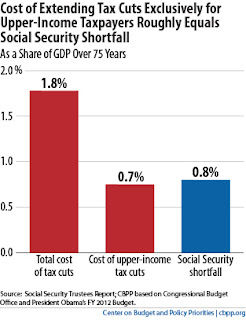 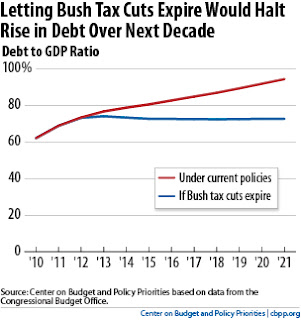 As a society, do we want our elderly eating cat food, while 2% of the population have fleets of yachts?


To retire the debt, first retire all the republicons in office who along with George Bush are responsible for the policies that led to that debt: two unpaid for wars, unpaid for medicare part d, the unpaid for Bush tax cuts.  Except they really weren't unpaid; they just charged everything and stuck us with the bill.

From Paul Krugman
You might have thought that an ideology that failed so dramatically would have been to at least some extent abandoned. But noooo: belief in tax-cut magic is central to the Ryan plan, and aspiring GOP candidates like Pawlenty seem to be in a race to see who can go more overboard in supply-side faith. Oh, and if you don’t believe their claims, you don’t trust the American people.
What will it take before the GOP drops voodoo as its official religion?

Posted by stephen sarbiewski at 2:31 AM