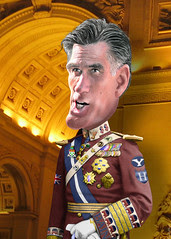 "We're going to start drilling again in the gulf, we're going to drill in the outer continental shelf, we're going to drill in North Dakota, Oklahoma and Texas. That communicates to the world that there will be more supply coming from the U.S. And that affects the price of gasoline,"
"The test is pretty simple. Is the program so critical, it's worth borrowing money from china to pay for it? And on that basis of course you get rid of Obamacare, that's the easy one. Planned Parenthood, we're going to get rid of that. The subsidy for Amtrack, I'd eliminate that. The National Endowment for the Arts, the National Endowment for the Humanities,"

For a man who claims to have "business sense", I've never seen a more hapless statement.  The US has 16% of global petroleum reserves.  We could double, triple or quadruple our domestic output and it would not make a 2 cent different in the price of US gasoline.  That is unless we made exporting US oil illegal, but the oil companies would never allow that.  If Romney and the other presidential candidates would stop talking about bombing Iran and starting another war in the middle east we would see a drop in the global price of oil.
Romney wants to eliminate Obamacare?  Romney wants health insurance companies to maximize their profits by denying our insurance claims due to pre-existing conditions.  Romney wants to replace Obamacare with higher health care costs and more unnecessary deaths and bankruptcies for every American.
Get rid of Planned Parenthood?  Oh no, your not.  Willard Romney and the rest of the republican party may have declared war on women and Planned Parenthood, but we are going to fight back.  So good luck with that Willard, you'll need it.
Finally, Mitt wants to eliminate subsidies for Amtrack.  Not everyone can fly around the country in fancy lear jets and jaunt about cities in helicopter taxis.  Mitt doesn't ride the train.  He doesn't even know anyone who owns a railroad.  While Europe and China are investing in high speed rail, republican governors are cancelling high speed rail projects and Willard doesn't even want to invest in low speed rail.

Posted by stephen sarbiewski at 5:51 PM