Doonesbury Stands Up for Women, Gets Censored 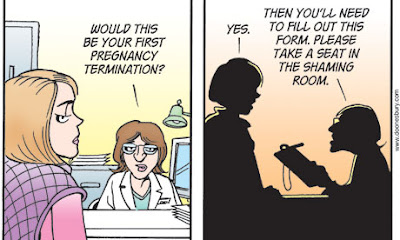 Doonesbury has been exposing Governor Rick Perry's invasive Texas abortion law.  Some papers have refused to carry this weeks drawings and some have moved them to the opinion pages.  Gary Trudeau has said that ignoring this issue would be "comedy malpractice".  I'd agree that this is legislative malpractice by the GOP.  Texas leads the nation in uninsured residents.  Over a fourth of Texans have no health insurance, and  Governor Rick Perry and his republican led legislators are mandating unnecessary and costly medical procedures.


Planned Parenthood has a Petition "Stand Up For Texas Women"

***Update***
More than 60 major newspapers have declined to publish the Doonesbury parody of Texas' abortion laws.
The Center for Reproductive Rights has a petition, you can sign to encourage the newspapers to carry these strips.(you'll need to sign twice, once for each group of 30 newspapers)


Some editors have claimed that these cartoons “go over the line of good taste,” but these cartoons are simply commenting on a law and its very real impact. What some editors are calling “too graphic” is just a depiction of what the law requires—that women endure an invasive ultrasound and listen to their doctor deliver an ideological speech.

I urge you to listen to all sides of this debate and to consider the serious implications of your censorship of this issue. Your readers expect the truth—and not just a candy-coated version of it.

Posted by stephen sarbiewski at 1:50 PM