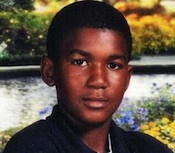 This Florida teen was shot and killed on his way home from buying iced tea and skittles.  The man who shot Trayvon was a neighborhood watch captain, that called 911 to report; "This guy looks like he's up to no good or he's on drugs or something."  He disregarded 911 instructions to stay in his car and then claimed self defense when Trayvon was killed.  The Tallahassee police investigation is full of problems.  We need the Justice Department to step in and do a proper investigation.  A tragedy like this touches and frightens every teen and parent in this nation.


****UPDATE****
The Justice department and the FBI have both launched investigations in this case.  More than 400,000 people signed the petition.

Posted by stephen sarbiewski at 1:04 PM