Image via Wikipedia "In the councils of government, we must guard against the acquisition of unwarranted influence, whether sought or unsought, by the militaryindustrial complex. The potential for the disastrous rise of misplaced power exists and will persist.  We must never let the weight of this combination endanger our liberties or democratic processes. We should take nothing for granted. Only an alert and knowledgeable citizenry can compel the proper meshing of the huge industrial and military machinery of defense with our peaceful methods and goals, so that security and liberty may prosper together."
Dwight D. Eisenhower 1/17/61 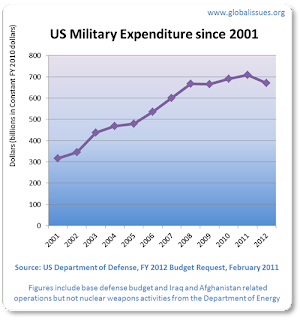 From MoveOn.org:
Right now giant defense contractors like Lockheed-Martin, Halliburton, and Blackwater are allowed to funnel taxpayer money from government contracts into lobbying and secret political contributions for their friends in Congress.
President Obama is taking on this perverse cycle by considering an executive order that would require corporations doing business with the government to disclose their political spending.1
In a new video, former Labor Secretary Robert Reich calls on President Obama to go further and ban all political spending by corporations that get most of their business from government contracts."

Posted by stephen sarbiewski at 12:22 PM