On Ethan Siegel's Blog Starts With a Bang, he analyzes data from the BEST (Berkeley Earth Surface Temperature Project) which was supposed to settle the question is Global Climate Change occurring.  Strangely, this study was funded in part by the Koch brothers and Richard Muller who headed the project was a vigorous skeptic of climate change.  When the BEST study found that indeed, the data did show a warming trend many were surprised.  It was also amazing how closely the data from the BEST study correlated with NOAA, NASA and other studies. 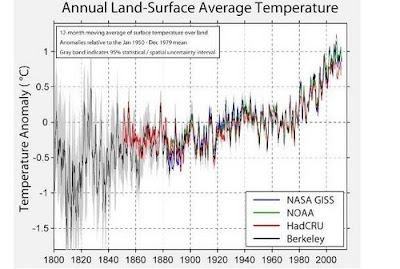 But there was one dissenter, Judith Curry the sole climatologist assigned to the study, disagreed and stated that the global warming trend had slowed and the data that Richard Muller presented in the  BEST results hid the decline.


"In Prof Curry’s view, two of the papers were not ready to be  published, in part because they did not properly address the arguments of climate sceptics.
As for the graph disseminated to the media, she said: ‘This is “hide the decline” stuff. Our data show the pause, just as the other sets of data do. Muller is hiding the decline.
‘To say this is the end of scepticism is misleading, as is the  statement that warming hasn’t paused. It is also misleading to say, as he has, that the issue of heat islands has been settled.’" [1.]

It's a great read, and Ethan Siegel explains very clearly so it's easy to see how Prof. Curry manipulated the data to create what some are calling fraudulent claims.   You can find it here.
[1.] The Daily Mail interview with Prof. Curry

Posted by stephen sarbiewski at 12:55 AM