Inept Congress Turns To "In God, We Trust"

Today, the 112th Congress dealt with an issue closer to its heart and more important than 14 million unemployed Americans, the foreclosure crisis and  America's failing infrastructure.  The republican controlled congress has decided to vote, on the nations motto. Of course, this is just another attack on President Obama.  Speaking in Indonesia last year President Obama stated our nations motto was "E pluribus Unum"-One from many, or Out of many, we are one. This phrase was selected by John Adams, Benjamin Franklin and Thomas Jefferson for our nations Great Seal in 1776. On the other hand the motto "In God We Trust" was enacted by the 84th congress in 1956.  Quick name a founding member of our country serving in the 84th congress of the United States of America? How about name any great American serving in the 84th congress?
How about Joseph McCarthy?  The  "have you no shame, sir" famous senator, the commie hating, god loving senator from Wisconsin who was later censured (67-22) by the senate for "conduct contrary to the senatorial tradition" but only after he had ruined the lives of countless Americans. Joseph McCarthy, used his office to engage in a witchhunt, but he wasn't hunting witches, it was communists. Mostly he was hunting anyone who disagreed with him and he used Christianity as bludgeon against those who opposed him.


"Today we are engaged in a final, all-out battle between communistic atheism and Christianity."- Sen. Joseph McCarthy, in a speech to the Ohio County Women's Republican Club on February 9, 1950.


Fast forward to today's do nothing republican congress and we have this statement from  Rep. J. Randy Forbes, (R-Va).,  who said in a statement:

"As our nation faces challenging times, it is appropriate for Members of Congress and our nation--like our predecessors--to firmly declare our trust in God, believing that it will sustain us for generations to come."

What Rep. Randy Forbes is really saying is "As our nation faces challenging times, (there are no jobs because we want  Barack Obama to be a one term president) it is appropriate for Members of Congress and our nation--like our predecessors--( well just the last 50 years, since the commie crazed congress of 1956) to firmly declare our trust in God,(whatever else it takes to carry the bible belt) believing that it will sustain us for generations to come (because all the generations that did without it, fared so very badly)."

As a nation are we comfortable with our revisionist 112th congressional members dismissing the wisdom of 83 previous congresses, some blessed with our founding fathers,  to follow in the footsteps of the cold war embattled 84th congress influenced by Joseph "have you no shame" McCarthy?

Patriotic lawmakers who voted against  "In God We Trust": 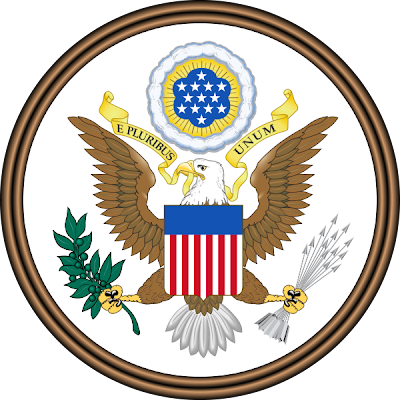 Posted by stephen sarbiewski at 1:45 AM

Email ThisBlogThis!Share to TwitterShare to FacebookShare to Pinterest
Labels: atheism, In God We Trust, Joseph McCarthy